It’s almost gone.  This happens every year.  The month of September just disappears.  This September has been especially busy for me in a good way.  In a yoga way.

September is also National Yoga Month, so it seems fitting for the month to be overfilled with yoga for sure.

First off, some college students started a FREE yoga class in Phelps Grove Park on the tennis courts.  It happens every Sunday and Wednesday evening from 9:00 to 10:00 p.m.   A little late for an old person like myself, but I’ve been and I loved it.  Yoga under the stars.  I live close enough to walk over so that’s a plus.  Another bonus of that class is that I didn’t know a soul over there.  That was cool.  No chatter, no questions, no answers just me and my yoga mat.  It was like I was invisible and that was pretty cool.  I’ll be going to that class again.

I also had to sub two extra classes this month on a Sunday at another studio that I used to teach at.  That was good.  The class was a restorative class and I love teaching that kind of class.  But wait.  I love teaching pretty much any kind of yoga.  I miss teaching over there but the studio sold out and of course, the owner needs to teach as much as she can in order to make any dough.  It’s what you have to do these days. 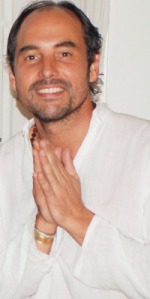 We both love Saul David Raye and he usually shows up in St. Louis every November.  But this year he showed up early.  We got our hotel reservations and sent in our yoga registration.  Then a week before the event my friend had to bail.  Instead of finding someone else to go with me last minute, I took advantage of the time for myself.  And of course I had to eat the hotel expense since we usually split it.  The weekend of yoga was fantastic and I enjoyed the time alone.  I never once turned on the TV in my hotel room.  But my husband had just given me a Blackberry (crackberry for sure) so I was able to entertain myself with e-mails and Facebook.  My mom and dad were in New Zealand for almost the entire month so it was cool to be able to read their e-mail adventures and view their photos while I was in St. Louis as well.  They took some amazing photos and just made it home safely.  Earthquake adventure aside.

I returned from St. Louis to the slap of reality when I pulled into my driveway.  A week filled with things like two dental appointments, a late night movie carpool, a trip that I promised to the mall (blech), a late night meeting at the YMCA , open house at school and moving props to a different location for yet another yoga workshop.  Whew.  There was something happening virtually every single day and night of the week.  Why does everything have to happen at once?  Ah.  The weekend would arrive and what would I do?  Yoga of course!  I wanted to attend this entire weekend of yoga with Sandy Anderson of the Himalayan Institute (hence the prop movement) as she was here in town.  But I could only spread myself so thin so I tried to hit a little bit of everything  happening yogically.

A friend of mine was hosting a meditation, bonfire and drum circle of women at her home on Friday night.  Was I going?  Heck ya.  I only knew one other person and made some new friends.  We ate great food, we sang, we sat around a bonfire and we meditated together.  This was a very cool and worthwhile evening and a great way to start a weekend.  Only one problem though.  I was totally exhausted from the prior week.

The weather  finally turned fall-like so that’s been a little energizing.  Saturday morning  two other good yoga teacher friends were hosting an event on the Old Iron Bridge over Lake Springfield to raise money for the Greenways.  I wanted to go because I’ve been teaching yoga on Saturdays forever until here recently, so I’d always missed this event.  As tired as I was it was the best way I could’ve started my Saturday.  The weather was perfect and the view was amazing.  We all faced west looking over the water.  It was neat to see canoes and kayaks going under us as we stretched our bodies into the morning sunshine.  I believe we raised around $1,000 with the matching sponsors that we had.  Nice.

After that event I was totally ready for a huge nap.  But my daughter’s plans were canceled and she wanted to be outdoors.  At the zoo none the less.  I took a deep breath and laced up my tennis shoes and off we went.  It was a gorgeous day and most all of the animals were out.  I really don’t know how I walked around the zoo for three hours.  Someone was definitely leading me around by my elbow for sure. 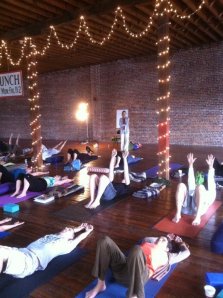 I woke up to a nasty, dreary, drizzly kind of day.  The kind of day where you just want to stay inside and drink an entire pot of coffee.  But could I?  Nope.  I was a scheduled greeter for the Sandy Anderson workshop and I’d already paid for the class that day.  Off I went.  The group was large.  So big that we used Nick Sibley’s studio upstairs.  The space was beautiful and she was an awesome teacher.  I enjoyed the class quite a bit.  The first part was light asana, the second part was lecture on meditation followed by a long sit.  Who knows?  Perhaps the studio that put on this event will be affiliated with the Himalayan Institute.  That would be great for Springfield for sure.

I’m teaching two more classes this week and I’m excited to do so.  But I’m also looking forward to a weekend of no commitments and no serious plans.  It is so amazing to see yoga so alive and well in our city.  I look back and think of what was available back in 2000.  Not much.  I heard someone say they were at a bookstore in 1999 and asked for a book on yoga.  The clerk sent her to the science fiction section.  Yikes.

I totally sing the theme song to Close Encounters every time I practice, don’t you?