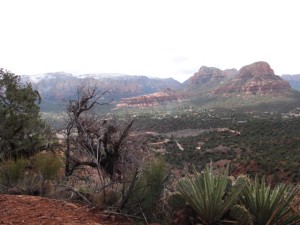 Our tour guide, Akul showed up at our hotel right on time.  We’d booked a tour of medicine wheels and we were excited and ready for an adventure.  The girls had seen several pink jeep tours running about town.  They asked Akul when he entered the hotel if we were going to go on our tour in a jeep.  He smiled and said, “No, we’ll be going in a Taurus.”  I immediately liked this guy.  He was a bit beaten by the weather and was dressed in casual safari wear.  He asked us if we wanted to see places where medicine wheels had once been, or where new ones were today.  We said how about both and he replied with, “Good answer.”  We clicked and it was awesome.

Our first stop was at a road not far from our hotel.  The view above was where we planted ourselves for a short while.  He hauled a couple of bags of stuff up this trail.  We also hiked away from all of the other people which is exactly what I wanted to do.  Once we stopped he told us that this place was a previous ancient medicine wheel site.  If it wasn’t it missed a good chance to be because this place was amazing.   Akul set out 4 purple cushions for us to sit on.  We sat up high on a ledge and from here we could easily see the major vortex points of Sedona.  Cathedral Rock and Bell Rock to name two.  The view was magnificent.  We settled in for a meditation.  I heard the wind, I heard some birds and most importantly I heard my inner voice.  I hate it when that happens, because the inner voice is usually correct.  After our meditation we had a little discussion about what or how we felt.  He asked us about any visions we had.  One of the girls saw orange with a white dove.  The other one saw a green snake.  I got a few of the upper chakra colors in pastels which was different for me.  I can usually get a dark blue or purple with yellow or gold around it.  It was very easy to settle into meditation quickly in this place.  There’s just something about it that I cannot explain.  I have a feeling that I will live in this place at one point in my life.  But that’s not important right now. 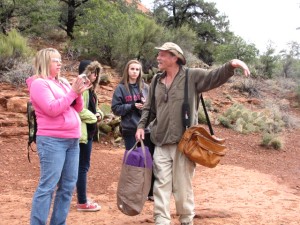 After our discussion we had another short meditation.  We were smudged with sage and cedar.  I’d had this done before but out in the desert you cannot light a fire or make smoke, so we were spritzed with a smudge if you will.  He fanned us with the feathers of a few birds of prey and I liked the sound of the feathers flapping us.  Again we had a conversation about what we felt at this time.  And of course by now our two 13 year old girls were thinking that their mom’s were a couple of raging lunatics.  They were totally good sports.  We’d warned them ahead of time that this was not their vacation and they were lucky to be tagging along.  I know.  Evil aren’t we?

After our meditation and smudging ceremony we headed down the mountain.  I didn’t want to leave.  We would return here on our last day. 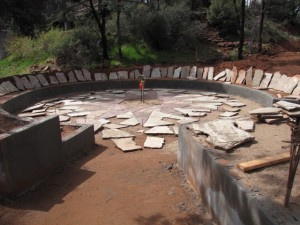 I think it’s one of my favorite hiking places in Sedona so far.  It would also be a great place to take a mountain bike.  We hopped in the car and were driven to a private home.  In this yard a modern day medicine wheel was being constructed.  It was amphitheater-like with concrete walls and large flagstones in the center.  Someone was spending some serious time on this one.  It was way cool.  Our next stop was a new age store.  The store had a medicine wheel in the backyard.  In the center was a gigantic crystal, it was pretty cool as well. 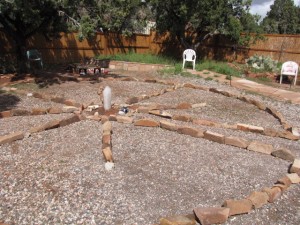 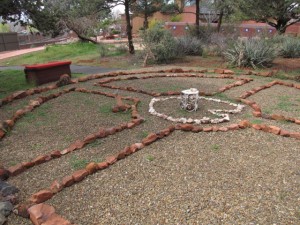 Our third stop was at Le Rouge Spa and Hotel where ironically enough, Akul said his wife teaches yoga.  Sadly, I never made it to a class while I was there.  In the backyard at the hotel is a medicine wheel that he and his wife had constructed.  It was beautiful and had a walk way like a labryinth.  No one broke into any David Bowie songs from the movie Labryinth so it was all good.  I was afraid Lauren might start dancing and singing “jump magic, jump magic” but she didn’t.  I guess it could’ve been pretty funny if that would’ve happened though eh?

Our final stop was on Thunder Mountain at Akul’s home.  He told us about the Amitabha Stupa (giant Buddha nearby) that we could see on another day.  He has a pretty decent teepee (that he had built) in his backyard.  We entered through the little hobbit door and checked it out. 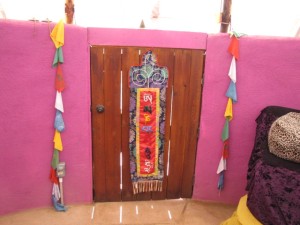 It was cool, just plain cool.  We all had a seat and talked a little about our day. 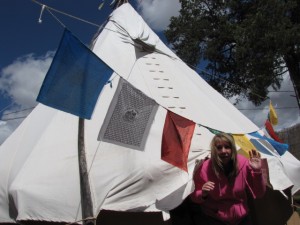 Akul grabbed a big Native American tambourine-like drum and started to chant an Indian song.  I totally forgot to ask him what it meant, go figure.  He sang for quite awhile and near the end his two big Alaskan Husky Wolf Mix dogs joined in.  It was awesome, so awesome that I thought he was going to cry.  I love hanging with people that are totally passionate about what they do.  He is definitely one of those people.  He spritzed us with this awesome smelling stuff from Peru.  He told the kids to pick a crystal out of this five gallon bucket and we were driven back to our hotel. 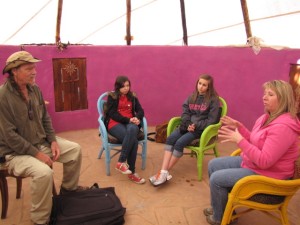 Once back at the hotel, we decided that lunch was in order.  Our 2 1/2 hour tour had lasted 3 hours and it was well worth it.  Akul has been featured in Elle Magazine and some other things as well.  And we found him because Darlene walked down the street to schedule a massage and picked up his brochure.  I love it when things fall into place like this.  When things are unplanned and turn out beautifully.  This is how I like to live my life.