Five weeks.  That’s how long my daughter got to spend away from home on vacation.  She is lucky to be 13 and to have the awesome grandparents that she has.  She actually flew to Florida with me on June 22.  That’s where my folks live.  They’re a skip to the beach and have a decent pool at the house.  I flew home on July 8, back to reality and a big project which involved a complete room revamp.  More on that later.

On July 7, my kid took off with my mom and dad in their camper and headed to Titusville to view the last take off of Atlantis.  The weather was looking pretty iffy and we just knew it would be delayed.  But nope.  It took off right on schedule.  It was quite the site for her to see.  The next day she met my sister, brother-in-law and niece in Orlando for her first trip to Sea World.  She loved it.

My folks even spent some time at this cool reptile farm.  They said all of the animals were well cared for and looked very healthy.  The alligators were obviously well fed.  I don’t think this dude would be wading in this water if the gators weren’t fed well.  What do you think?  Lauren also held a large snake and a tarantula while she was there.

After they left the state of Florida, they were heading to Duluth, MN to visit some relatives.  They stopped in a small town in Georgia at a campground as they were pulling their camper and it was time to rest.  It turned out that Billy Bob Thornton was at the campground with quite the crew working on a film called Jayne Mansfield’s Car.

This is the imagine that part of the story.  Lauren loves Billy Bob Thornton.  And since my family had video stores for 20 plus years (I had one for 12) they had several Billy Bob movies at the house.  We’d spent the last week cueing Lauren in on all of his films and letting her see the ones she hadn’t seen yet.  She totally loves Billy Bob and well, I’m just going to go with it.  I have to be in the mood for some of his stuff, but I think he’s pretty damn funny most of the time.  I know what you’re thinking.  I let my kid watch Bad Santa, Bad News Bears and Mr. Woodcock.  And yes, yes I did – all in one day.  But first I hooked her up with some weed and a bottle of Jack just to get her in the mood for the raunchy sarcasm.  Just kidding about the weed and the Jack.

From Georgia she sent me a text to tell me that Billy Bob was at their campground and I was all like, whatever sure he is.  Not only was he there, so was Robert DuVall, Kevin Bacon and Patrick Sherman and someone else that I can’t remember.  The next day Lauren got to meet Billy Bob and told me that this was the best vacation with grandma ever.  I know, imagine that.  She got her autograph and went back the next day to ask if she could have the pen that he used as well.  They gave it to her.  She said everyone was very nice. 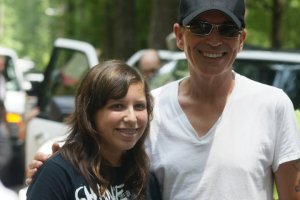 My mom with Robert DuVall.  It was hot, check out his sweaty back. 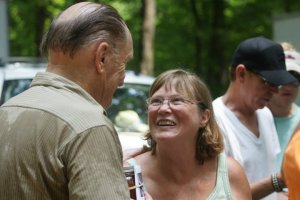 I’m sure she’s met him before at one of the VSDA Conventions that we used to go to.  I know she wouldn’t want this posted but too bad.  I think it’s a good photo.  After all, she’s camping.  No maintenance allowed.  She also said they had to wait for 4 hours for the crews to come back up the hill after they were done filming.

I think they stayed an extra day at this campground due to all the excitement.  Then it was onward to the north.  They enjoyed a great visit in Duluth and arrived here in Springfield on Monday, July 25.

It’s great to have her back home.

One thought on “Imagine That”