I am still cleaning.  And I am cleaning more than I ever thought that I would.

When I started cleaning the IMAX theater, it was just Saturdays and Sundays.  That’s now turned into Fridays too.  I also clean there on Thursdays whenever needed.  I’ve decided that I have a tendency towards craving and aversion with the theater.  Total love hate relationship for sure.  When I wake up at 4 in the morning and drag myself out of bed, I often ask myself, “What was I thinking?”  But that goes away pretty quickly.

I don’t have to look good and I can wear whatever I want.  I have also lost 11 pounds since I started this job.  Woo Hoo!  I am getting an amazing workout and I am getting paid to do it!  Very cool.  I can pretty much run up and down the IMAX stairs now, without the fear of tripping over a cord and breaking my neck.  I’ve learned what I can and cannot sweep up.  For instance, napkins, straws, soda pop bottle lids, licorice and the plastic that 3-D glasses come packaged in, can pretty much wreck your day.  What I can sweep up pretty much and a lot of, is this. 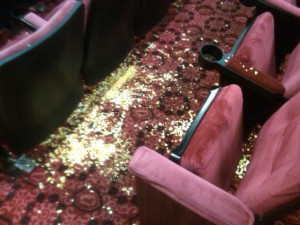 I mean really.  This is actually a minor popcorn spill compared to some that I’ve seen.  I do realize accidents can and will happen.  I think otherwise.  So bascially, I hate to admit it, but yes.  I’ve developed a bad attitude towards 80% of the movie going public in general.  Some people leave everything they bought or brought inside the theater.  The stuff that people bring in there is mind blowing.  Curious?   I thought so.

Bottles of liquor – all sizes.  I even found an empty fifth of 7 & 7.  If it wouldn’t have been empty, I would’ve been tempted to finish it off.  Granted it would’ve been like 5:30 a.m……just kidding.  Cans of beer in lots of cool and interesting varieties.  Lots and lots of Skoal, in cans and unfortunately in spit cups.  Gross!  Packs of cigarettes, brand new and opened.  Some folks don’t/can’t eat the popcorn shell, or kernels.  So they chew up the popcorn and then just spit out the kernels on the floor!  I know, gross.  The kind people put it in a napkin and leave it there for us.  The really kind people, take it to the trash can on the way out.  Lots of candy, some of it brand new in the box.  All I know is this.  If I paid $5 for a box of candy, I’m taking it with me when I leave that place!  Jackets.  Cell Phones.  iPods.  Hats.  Debit and Credit Cards.  Spare change.  Thank you all for the tip.  Please leave more, we totally deserve it!

The list goes on.  Wallets.  Hair bows, bobby pins and headbands.  Dirty kleenexes.  Fingernails.  I know.  I guess 50% of the public actually bite their nails at the movies.  I suppose they think that those things just disappear when the lights come on.  Food wrappers from Subway, Steak-N-Shake, McDonald’s (fries still intact).  The biggest and funniest thing I’ve found so far was this.  A round sushi tray, complete with chop stix and two artifical flowers.  Awe.  What a sweet date night!  But really, that thing was the size of a pizza pan.  Speaking of pizza.  One time we tossed out 14 pizza boxes from the IMAX and found pizza slices on the floor.  I often wonder what was the average age of the people who saw the movie the night before.  Is it only kids who trash the theater in this way?  I don’t think so.

Let me tell another little story.  I am in line at the grocery store.  Some ladies are talking about going to the movies.  They said they took their grandkids and just told them to leave all their crap in the theater because it was so incredibly expensive.  Nice.  I was very tempted to say, “Hey.  The theater has to pay a cleaning company to pick that crap up and maybe that’s why the treats are so high!  The longer it takes us, the more it costs them.  But I get paid by the hour, so go ahead, leave it all.  Please drop a $5 with that mess if you don’t mind.”  But I kept my mouth shut.

Yoga is still rockin’.  I drove to Mt. Vernon yesterday and did a restorative class for 2 1/2 hours so that was pretty decent dough.  I am thankful I have yoga and I am thankful I can clean when I’m not doing yoga.  I love the idea of being flexible and getting into something I really never considered doing.  I have met so many cool people through this job.

Off to enjoy the rest of my Sunday.  The theater’s clean, but I teach yoga at 4:00.  Did I mention that I don’t have a complete day off anymore?  Big deal.  I am heading to Florida on June 11th and will be gone with my kid until the 27th.  And I am really appreciating the fact that I’m going on vacation this year, much more than the year’s gone past.  My brother is flying to Florida as well and it’s been a couple of years since I’ve seen him so this is going to be a super cool and very fun time.

One thought on “Seriously Sushi”