This weekend was yet another amazing one.

Starting with Friday afternoon, our son totally kicked butt at the track meet at Parkview.  The day was beautiful, not much wind, no clouds and tons of sunshine!  He ran in three events, and came in second in two and first in one!  Way to go Jordan, you’re awesome!

Saturday morning I found Lauren a bike on Craig’s List.  I drove out South of town to check it out.  It turned out to be a basically brand new bike, for a not so brand new price!  Sold.

As I left there my cell rang.  It was my sister who was on her way to check out some authentic Indian rugs that she’d found on Craig’s List in Florida.   I’d been wanting a runner for our super long hallway, but they cost too much.  I told her I was in the car and trusted her to make the purchase, she’s got good taste like that!  This lady had 4 rugs and 1 runner for $50 each.  I asked my sister about the quality.  She said, “She was wearing a Sari and spoke broken English, what do you think?”  Sold. 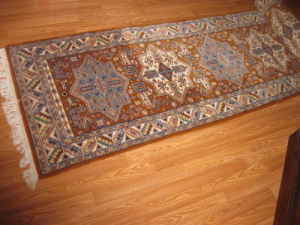 Saturday afternoon I checked my auctions.  I ran a bunch of yoga clothes on e-bay as I often do and they were doing OK.  I also ran a little 6″ vase, circa Nippon.  It was holding at $20 for a few days, but Saturday, it shot up to $102.  It had an hour left.  I decided not to waste time and watch it end.  Where did I go?  Yoga, of course!  When I returned the auction was over.  Someone really liked that vase as it sold for $350.60.  I wish I had another one, or two, or three……  Sad thing is, it’s probably worth 3 grand or something.  I’d had it a long time.  I like Asian inspired things.  I like bright Asian inspired things and as you can see, it’s pretty muted.  I like Lusterware, it’s shiny! 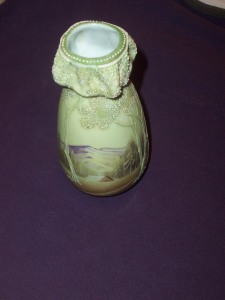 Saturday evening came around and it was time for me to back up everything I cared about so Frank could hook up my new (used) computer!  The computer I have is older and I’ve never had a problem with it,  but it was starting to run really slow.  Too many high end programs.  Too much stuff not enough space.  (Sounds like my house and my internal organs).  Anyways, we spent the evening hooking up, re-installing and copying files over.  It’s really fast now!  I cruised through the yoga community group e-mail awhile ago.  The internet really loads fast too, so I’m excited.  Free computer, yippee!!

Sunday came.  More of the same, computer stuff, etc.  Until my friend  Sylvia (the artist) called.  She had something to bring over.  OK.  I’m home no big deal.  She walks in the door with this.

Yep, another beautiful painting framed and ready to go!  This is her new character, Dr. Woo Hoo.  She called this one “At OHM with Dr. Woo Hoo.”  Amazing, absolutely!  Just check out that detail and those colors!   She needed to borrow the other one she’d just given me (Dr. Woo Hoo Cooks) and we hung this one in his place for now.  How lucky am I?  Totally lucky.  I am building her a small website to showcase her art.  The world really needs to see her heartfelt brightness!!

Perhaps the goodness of the weekend was fueled by that yoga class and the power of Dr. Woo Hoo!!  That vase action didn’t hurt either. 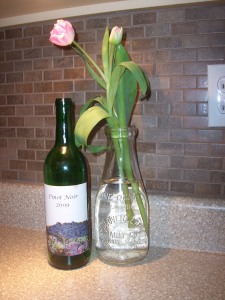 Some days, you really do wake up and realize you are surrounded by amazing friends!  That happened to me this weekend.  My friend Michelle, gave me two bottles of Pinot Noir.  Not just any old Pinot Noir, but Pinot Noir she had made herself!  I met Michelle I don’t know, four or five years ago when she came to my yoga class.  In fact, her entire family attended my Family Yoga Class for quite some time and they’re all awesome!

I made myself wait to open it, almost a week!  Saturday, I taught a three hour workshop on the Psoas Muscle and I was more than ready to relax.  My husband was working out of town and my kids were gone.  It was time to pop the cork.  This was and is (I have one more bottle) some of the best wine I’ve ever had.  Really smooth, hints of grapes and beautiful color.  Though she told me it was cloudy (sulfite free) I didn’t really notice it and I didn’t really care.

She needs to open her own winery!!

I arrived home Sunday evening after another three hours of yoga.  This time to my family and chaos.  I’d been at the Spring Equinox Yoga Mala where we did 108 sun salutes for charity.  Shortly after walking in the door, I poured myself another small glass of that great wine.  My friend Sylvia called and wanted to drop by.  She had a surprise for me.  I met Sylvia when our kids started Kindergarten.  Her daughter Emily and my daughter Lauren are very good friends.  Sylvia is an artist and a damn good one!  Her signature is to cover her pieces in this tiny little iridescent glitter.  Her work is whimsical with lots of animals, faeries, glitter, gardens and what nots.  I love her stuff!  She made me something for my kitchen.  A sock monkey character she’s named Dr. Woo Hoo.

Dr. Woo Hoo is a pretty cool dude.  He’s an adventurer and this time he ventured into my kitchen cooking up a storm.  This is adorable!  She brought this to me framed with a nail taped to the back so we could hang it immediately.  I had to include a couple photos of the detail work, it’s amazing.  She did this with colored pencils and crayons.  Can’t say if I used colored pencils and crayons that I could make something like this.  The frame is gorgeous, and the orange carrots and the blue colors just bounce off my chocolate kitchen walls.

I poured her a glass of Michelle’s Pinot Noir, then I broke out a  package of sheep’s cheese and some crackers.  We admired her work and enjoyed the wine.  What awesome people I know!  Thank You!

Yoga and chocolate.  Two of my favorite things.  And I was fortunate to enjoy both, blissfully today!

I started my morning at the studio participating in a class taught by a good friend of mine.  She moved us in a wonderful way.  The weather was warmer today and I believe that had all of us in a giddy mood.  Made for lots of laughter in the yoga room today.  Not a bad thing at all, not a bad thing at all.

Shifting to this afternoon.  I helped my good friend show her stuff at the Art & Chocolate Show downtown.  She had stirred up a confection of sweet melodies with a guitar, a jukebox some chocolate vinyl and a microphone. 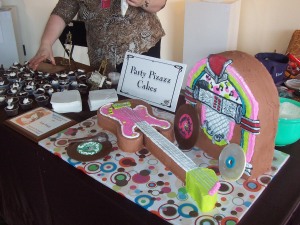 We gave away samples of chocolate cake with chocolate truffle filling topped with vanilla cream and a little chocolate round on top.  Good stuff, people loved it. 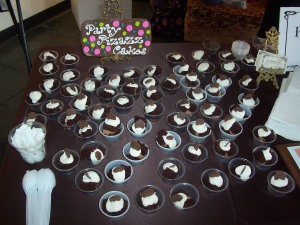 Our table was close to the front door and we were conveniently located next to the Gallery Bistro and Gilardi’s.  Not a bad slot to be in.  Gilardi’s was serving up some awesome chocolate salami covered in a warm chocolate sauce.  It reminded me of a chocolate cookie dough (a really good chocolate dough) as it was rolled in a log, sliced and served.

This is a yearly show sponsored by our Art Museum.  You have to create something in chocolate, anything.  There were truffles, cakes, syrups, ice creams, cookies and more!  One place even had (get this) brisket with chocolate sauce!  I was hesitant.  I was on a sugar high.  Meat really wasn’t on my bliss list.  But as I walked by their table this guy asked me if I’d tried it yet.  I said no I hadn’t but my friend had (and she really had) and said it was pretty tasty.  He then told the guys working the table to fix me up some of that chocolate brisket.  Then he asked me to look into his camera as I tried it.  Nothing like capturing a true expression.  Who knows when and where that photo will surface!  It was delicious.  I really didn’t notice the chocolate, but I’m guessing it was probably there!

To chase all of this cocoa down there was a milk, wine and coffee bar.  They had one band in the main area and an acoustic musician in another.  I came home with a container of a little bit of everything to share with my family.  Chocolate and yoga, what a great day!

Already voted.  Went at 7:45 this morning.  No line, walked right in.  Kind of scary.  By the news I saw this morning, lots of places were packed at 6:00 a.m.  Perhaps, people weren’t out yet.  The place was really starting to hop as I left.

The FREE Starbuck’s coffee that was offered for voting, was out of the question.  That place on the other hand, was packed.

To the left, I’ve posted words from both presidential candidates.  One block belongs to Obama, the other belongs to McCain.  If you want to know who said what, visit Flickr.  Nice work. I found this piece of work to be cool and very creative!

Enjoy the day.  And of course, VOTE!