My daughter.  At 14 she’s into changing the color of her hair about once per month.  I told her we must stop this or it’s going to fall out!  She just went soft black, so I’m hoping this is the journey back to her beautiful brown.  She will start 9th grade this year.  Where does the time go?

She’s good in school, but she’s a bit on the lazy side.  I am always onto her about it.  When she truly studies and puts her heart into it, her grades are amazing.  And she doesn’t have to try that hard.  So far she hasn’t found anything she’s totally passionate about.  She took French last year and liked it so much that she’s taking it again her Freshman year in high school.  She’s also taking Drama.  I think that theater is going to be her thing.   Something arty for sure whether it be make up, set or costume design, (she’s expressed an interest in sewing) photograhy, film or something like that.

She is still volunteering through Wonders of Wildlife (WOW) and that’s a good thing for her to do.  I did slack and not get her over there like I should’ve so we are cramming some hours in before we leave for Florida here very soon.

We will return from our trip just in time for her to go to St. Louis to hit Warp Tour.  She’s really into alternative music, funky colored hair, skinny jeans, converse of the variety, band t-shirts, beanie hats in many colors and sleeping very late and staying up all night.  I was never much of a night owl, but – I have to remind myself that she – is not me.  She’s coming into her own person, with her own personality and we are pretty much black and white.  She’s very social, has a lot of friends and would rather be anyplace but at home. 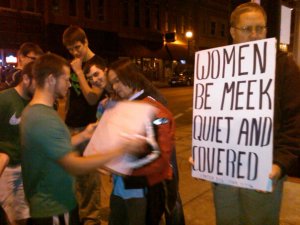 Our son.  He’s on the left in the green shirt.  He’s downtown at Art Walk paying that guy $1 to write whatever he wants to write on his sign.  Good idea.  He said that guy had made like $30 in 20 minutes.   Hilarious!

He made it through is first year at CMU – Central Methodist University and he did really, really well.  He wanted to live off of campus next year, but you can’t do that there until you are 21.  Something we forgot to ask, silly us.  He disliked the dorm he was in last year and some of the silly people he had to live with.  He was also roomies with a football player, so when that guy had Fall practices going on, Jordan wanted to stay up late.  Then in the Spring when it was time for track, his roomie wanted to stay up late.  He did so well athletically that they gave him more dough and he can afford to live in a dorm in a private room with his own bathroom next year.  He’s really happy about that!  Oh, we are happy too!  No more money out of our pockets.

He hasn’t been able to work much because once track started he had to be out of town at meets every single weekend.  He worked a small job on campus in the art department (so unlike him) but he did well doing that and made a little money.  For the summer he landed an internship, a paid internship at that, with the University of Missouri.  He’s living in the woods for 10-weeks studying birds.  Next year he hopes to land another paid internship tagging sharks in Mississippi.  He recently passed his scuba certification so that was exciting and something he’s always wanted to do.  And we could afford it because it was offered at CMU.

He placed 11th in the recent track meet, the college Nationals.  He was actually ranked third in the nation in discus, but got beat on that day.  He is still able to qualify for the Junior Olympics for kids 16-19 and if he makes it, he will travel to Barcelona in July to compete.  Very cool.  So bascially right now, he’s trying to do an internship and do well in track.  He even hauled a big piece of plywood to the bird study so he could practice every day.  The kid is super disciplined and very dedicated.  We are very proud of him.

Years ago (I’m only 42) I wanted to be a nurse.  So, I did what people would do.  I enrolled at SMSU and started with the nursing pre-requisite classes.  This would be my first college experience and I was married, working full-time during the day, and I was 25.  I got almost half way through those classes, when I had the opportunity to own my own business.  I worked the business and went to school, actually, I worked for FREE for two years to pay off the debt.  After a short time, I discovered that by going to school and running the business I would definitely fail at both, so I had to make a decision.  I quit the school and ran with the business.  I loved the classes that I took, I especially loved the English class.  I still have the book from that very class, and in it, is the poem below.  I have it memorized.  I love it.

Begin.  Keep on beginning.  Nibble on everything.  Take a hike.  Teach yourself to whistle.  Lie.  The older you get the more they’ll want your stories.  Make them up.  Talk to stones.  Short-out electric fences.  Swim with the sea turtle into the moon.  Learn how to die.  Eat moonshine pie.  Drink wild geranium tea.  Run naked in the rain.  Everything that happens will happen and none of us will be safe from it.  Pull up anchors.  Sit close to the god of night.  Lie still in a stream and breathe the water.  Climb to the top of the highest tree until you come to the branch where the blue heron sleeps.  Eat poems for breakfast.  Wear them on your forehead.  Lick the mountain’s bare shoulder.  Measure the color of days around your mothers’s death.  Put your hands over your face and listen to what they tell you.