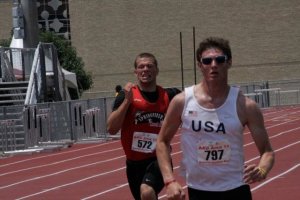 Our son Jordan (shown in the black and red) is quite the athlete.  Track is his thing and he loves it.  At the end of the school year he’s always a bit depressed that the season is over.  That was until this year.

This year a guy started the Springfield Track Club and several kids joined up.  Oddly enough this guy is also a neighbor of ours as well and was interested in Jordan already.  Jordan was so excited to have a track team to practice with as soon as school got out.  They practiced two nights a week and attended several track meets as a team out of town.

The last meet they entered happened in Tulsa.  Here was where he would qualify for nationals.  And qualify he did.  He spent this last weekend in Norfolk, Virginia with 10 or so others that qualified as well.  This is pretty cool stuff.  He was so excited and so were we.  But.  Neither Frank nor I could head to Virginia.  I’d just been gone 24 days and we didn’t expect this to happen.  His mother was able to be there.  His aunt and uncle were there too, they live close to that area.  He had a strong support system there and we were thankful.

He placed FIRST in discus and SECOND in shot-put.  He entered the Decathlon which meant 5 events for him on Saturday and 5 for him on Sunday.  He did great, we are so proud of him!

Check out his stats –

He’s hiking and camping in the mountains of Virginia right now and we sure can’t wait to have him back home to hug him and congratulate him properly!