Yesterday was a pretty hot day.  Almost too hot to go to the lake, but we went anyway.  Just Frank and I.  The kids were off doing their other weekend things.  We took the boat, some chairs, an umbrella, my floaty, some snacks (sushi) and some fishing poles and the camera.  We didn’t catch much but had a great day.

We saw a total of 4 boats all day.  That’s what I like about Stockton, it’s never that crowded.  Now a Saturday at Table Rock would’ve been a completely different and totally unrelaxing story.  We parked our boat here and played most of the day.

It was so quiet you could hear the flapping wings of this Turkey Vulture.  There were several out yesterday.  I saw two beautiful hawks as well.

While Frank was off fishing I was busy floating.  At one time I had 12 dragon flies on  my legs.  Eight on one leg and four on the other. 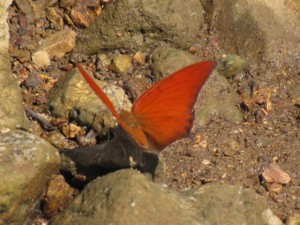 This moth was pretty bland and gray on the outside.  Once she opened her wings she was quite the show.

We trolled the bank all the way back to the boat dock.  It was around six o’clock and the sunlight on the water was beautiful.

As we came around a bend I spotted this Blue Heron.  Frank didn’t stop trolling fast enough before we got into too much sun.  Then we were too close and it flew off.  Crazy boat drivers……just kidding.

We pass this old school house (and cemetery) on the way to launch the boat.  It has a high fence completely around it with with no tresspassing signs as well.  It’s a neat old building.  It’s near Aldrich or something.  I really have no idea of the exact location or town.

You can see inside of it and through the windows that were once there.

Woke up this morning to the hummers fighting over the feeder.  It’s a beautiful day I slept in and missed yoga.  I guess I’ll forgive myself.  Get outside while it’s still cool, I’m going to.