Since 1998 or so, I’ve wanted a Volvo S70.  Volvo only put out this body style for a few years.  Some people think it’s totally ugly.  Eleven years later, I still think it’s totally cool.  Back in 1998 or so, this car retailed for around $27,000.  Back then, I could’ve purchased it but I thought that was silly when $27,000 could buy part of a small dwelling here in Springburg.

I go through these phases of endless internet searches for Volvo S70s that leave me strung out, red eyed and ignoring my family.  I bring myself back to reality with my yoga practice on being happy with what I have and that would be a 2003 Ford Windstar mini van.  I’ve owned it since March 2004 and it’s mine free and clear.  On Wednesday I found a Volvo S70 that looked awesome on the internet, so I made a call and the dude on the line sounded decent.  Since the kids were out of school today, I decided to get someone to teach my morning yoga class and drive to CLAREMORE, OK to check this car out. 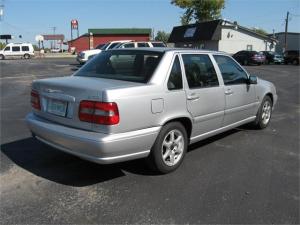 Since Frank is living at the mall these days, I went alone.  The weather was great for a road trip.  I figured all I would be out would be some gas money and the $70 for that check I borrowed from the bank in case I didn’t need it.  Whatever.  Small change compared to what settling for what I’ve already seen and regretting it later might bring.  I arrived at 10:45 a.m.  and tried not to pee my pants as I looked at the car staying completely emotionless.  But inside I was like OH MY GOD this is the nicest Volvo S70 I’ve ever seen and it’s a 2000, not a 1999, not a 1998, and OH MY GOD it really does have 48,700 miles on it.  And the seats are NOT cracked.  At all.  I drove it and it was perfect.  Shit.  This is really going to suck because I know he’s not going to give me crap for my hail damaged van, plus do I have enough money in my yoga checking account to buy this car when I need more than what I got from the bank?

McDonald’s.  That’s where I went after he told me to go and eat some lunch because I’d already been there for almost two hours.  I sucked on my sweet tea and gazed out the window at this car knowing I could have it.  I was happy but also sad knowing he probably wasn’t going to budge because if I didn’t take it today, someone would take it tomorrow on a sunny Saturday in Claremore.  I returned from my rush of fat and sugar to ask him if he would take XX amount of $$ and my van.  Nope.  Sorry.  Ok then.  How about XXX amount of $$ and my van?  Nope.  Sorry.  Hard headed he was, because duh, it’s the nicest S70 in the freaking midwest.  I tried the, “But it needs a new keyless remote and I will need to have a wing on the back because it’s so grandma-like and the door panels have a tiny problem (like they all do) and it has no sun roof and it’s priced like a GLT and it’s an SE.”

None of this crap worked, none of it.  Amazing.  That totally sucked for me.  I wouldn’t even take the water he offered me because I thought I might throw it up.

I’ve never wanted an Audi, a BMW, a Lexus or even a Mercedes, only a Volvo.  At 2:45 p.m. I caved.  I whipped out my yoga check book (thank you everyone) and gave him the extra that was needed to seal the deal.  He went down an entire $50 after I asked him to at least take off what it would cost for the divorce I was in for when I got home.  After it was over I told him it was the nicest S70 I’ve ever seen (and I’ve seen a lot) and that something had to be terribly wrong with the car because it was too good to be true.  Nope, it’s just a good, clean, well cared for S70.  I also asked him if he had an extra room at his house that I could stay in until my husband decided to take me back.  I drove it home.  I finally took that bottle of water.  Done deal.

It’s mine.  I love it.  I don’t think I’ve felt this way about a vehicle since like 1986 when I had my Mustang GT.  When Frank checked it out tonight, he was like “WOW” very nice car.  I still have a home and a husband.

Now all need is a Namaste sticker for the bumper.