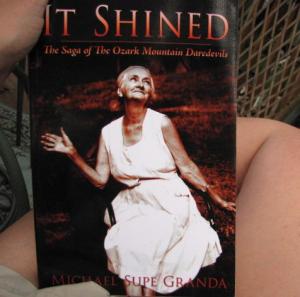 I’m surrounded by amazing neighbors.  I am.  The week before my vacation, our neighbor to the south, gave my husband a signed copy of the book you see on the left.  I flipped through it and was immediately hooked.  I was 10 the first time I heard the Ozark Mountain Daredevils.  I heard them on my own, weird, little plastic, rectangular radio with the huge dial that I had in my room.

Our house was a musical one.  My mom played accordian, I played violin and my brother and sister both played piano.  We had one of those rad stereos mounted on the wall.  You flew the front doors open and the speakers swung out to the side, then the turn table dropped down for the spinning of the vinyl.  And spin some we did.  On that turn table the records of Johnny Cash, Cat Stevens, Fleetwood Mac, The Mama’s & the Papa’s, Jim Croce, Elton John and the Eagles were played.  The Eagles were played so much that today I can only stomach them if it’s my husband strumming their stuff on his guitar here at home.

I saw the Ozark Mountain Daredevils only once, late 80’s or early 90’s I can’t remember.  They were playing at a country-type bar that was located by the Wal-Mart on South Campbell street.  It was fun, it was crowded, it was a bar.  I also used to frequent the River Rock where Supe & the Sandwiches played quite often.  That was a fun time in my life.  And after reading the book, it was a fun time for them as well.

I liked the fact that several things around our area are mentioned in the book since they spent a lot of time here.  You’ll find the radio stations and personalities, the venues, the other musicians they were associated with and the places around the Ozarks familiar if you’ve lived here long.  I’ve lived here my entire life.  My mother-in-law is from Aldrich, MO.  I showed her a photo in the book of Ruedi-Valley Ranch (where they lived in Aldrich) and asked her if she’d heard of this place.  Her eyes lit up.  “Why yes.  My dad did a lot of work on that place.  It’s probably still there.  I could take you right to it, would you like to go sometime?”  Heck ya.

One thing I liked about the book is the easy flow, the sense of humor, the sarcasm and great detail.  I also liked the way the author never bad mouths other band members, even though the reader senses some serious tension at times.  The book pretty much sticks to what happened to them as a band.  So if you’re looking for a lot of personal stuff you won’t find it here.  There are tidbits but all in all, the story is the story of a band.  If you’re interested in and not bothered by the mention of recreational drug use, this book is for you.  If you’re interested in wild groupie stories and crazy rock-n-roll sexcapades, this  book isn’t for you.  The author does mention Connie Hamzy at one time and I think her name is misspelled in the book with an “s” instead of a “z.”  The story starts in the 60’s and ends in 2004.  That’s a lot of ground covered and it’s covered in great detail.  I think today we tend to forget what entertainers had to do to get a gig or make a record.  These days you just put yourself on youtube or audition for American Idol.  Enjoy this local rock-n-roll story.  It’s totally worth it.

When I arrived in Florida, book in hand, the first thing I did was walk out to the pool with my camera.  My parents still have their huge Super Video sign leaning against their back garage.  I had to laugh as I shot this photo.

Any other day, the supe in super wouldn’t have meant so much.  Thanks for a great read.  The story really does shine.