Thought I’d share the journey of the freaky caterpillar.

Two days after I found this little dude, he has morphed into this.

Looks like a stick, eh?  Pretty much.  His shell is somewhat hard, and there are rough places on it.  Some are spike-like.  Can’t wait to see the butterfly he’s supposed to turn into.  We hope he makes it.  I don’t think there’s anything we can really do except just wait it out.

Yesterday afternoon as I was walking up the porch steps to the in-laws I saw this crawling about. 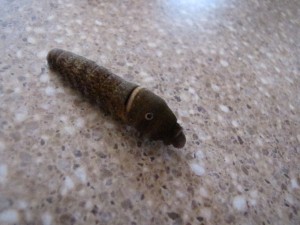 I wish I would’ve taken more time to get a better photo of this dude.  I thought I’d try again today.  But today he’s turned almost completely brown and is hugging a dead leaf pretty hard.  He’s going to turn into a Yellow Swallowtail butterfly!  I’d never seen one of these before.  I took him inside the in-laws and he kept crawling around and raising his head up.  He looked like a snake or a fish at certain times.  He also had a red or orange tongue like thing that he would show us every now and then.  Creepy!  Definitely a weird little caterpillar. 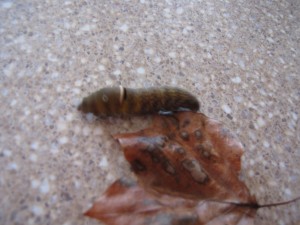 These caterpillars are found in town, in areas that are older with mature trees which describes where we live.  I also learned that they are seldom seen and usually move about and feed at night.  We had a windy afternoon yesterday (sort of like today) so I’m guessing he was on a leaf that was blown out of a tree.  I also learned that these caterpillars are usually not around after September.  I’m guessing since we’ve had such a warm fall so far, this is why he was out and about.  I’ll post some more photos as he moves through his changes.  How cool is this?